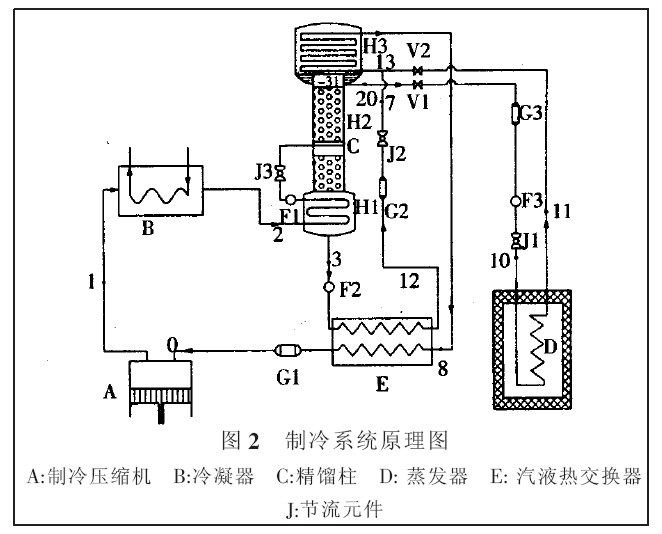 After the mixed medium is discharged from the compressor A, the condenser B is fully condensed and enters the column reactor heating column kettle liquid of the rectifying column C, and then is throttled into the tower. After the rectification and separation, the low-temperature refrigerant R23 is heat exchanged. After entering the column overhead evaporator, the R22-containing refrigerant is cooled to form a liquid and flows out from the bottom of the column. After throttling, it is mixed with the R23 gas return, evaporated at a temperature of -20Â°C in the condensing evaporator, and vaporized to convert the column top R23 refrigerant. Condensed into a liquid, the mixed refrigerant is returned to the compressor via the regenerator E under the suction of the compressor. The condensed R23 liquid throtts to vaporize, and the evaporator D obtains a low temperature. This cycle uses a rectification column instead of a multi-stage partial condenser, which effectively separates the high-boiling and low-boiling refrigerants in the rectification column, and realizes a cascade in the cycle.

The natural cascade refrigeration system has only one compressor. The other equipment is a non-moving part. The structure is simple. It reduces the operational failure rate and simplifies the system control. Compared with binary cascade refrigeration, the system compactly reduces the unit size and saves more With more installation space, it can be used to produce a lower temperature and a wider temperature range.